Does The Drop Really Make Apple A Buy?

Parchayi and me long Apple (AAPL) but am not adding to my Apple position on this dip and here is why.

Simply, Apple’s growth has slowed down to nothing. I recently compared Apple’s growth to that of Google (GOOG) and Microsoft (MSFT), and both those companies seem to be growing faster than Apple.

A picture is better than a thousand words. Here is what Apple’s growth looks like: 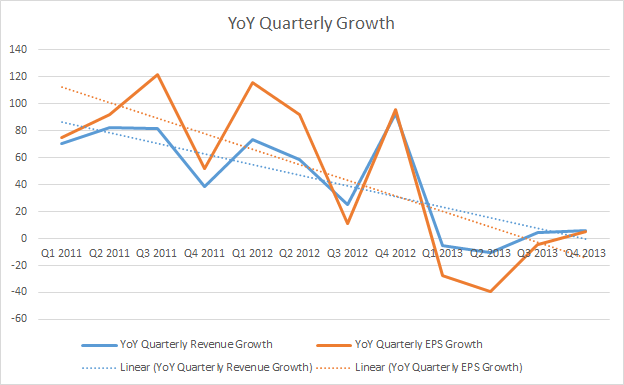 There is a distinct downward trend to Apple’s growth that started in 2011. This also coincides with the year that Apple replaced major improvements in it’s devices and moved on to incremental updates. Here is a quote from the Engadget review of the iPhone 4S that sums up the iPhone and subsequent generations perfectly:

“iPhone 4S does everything better than the iPhone 4, but it simply doesn’t do anything substantially different.” 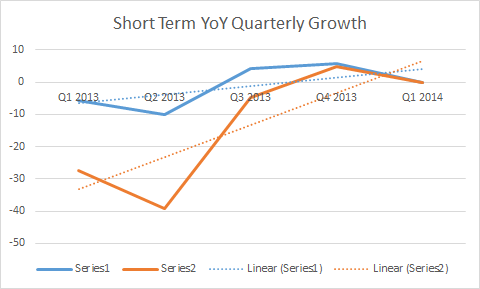 Is this the beginning of an upward trend? Or is this just a short term part of a longer downward trend? The picture is not clear yet. I would wait for next quarters results before investing in Apple. I’m not selling yet either, though. For just one reason. I finally think this might be the year that Apple steps up to the plate and makes an iPhone that can compete with its larger screened NFC toting Android brethren.

Wow, hats off to these parents:

Former NRA President duped by Parkland parents into giving fake graduation speech to empty chairs. He thought this was the rehearsal, but a simple Google search would have told him the high school doesn’t even exist.

One of those crossover points we will look back on: @BloombergNEF analysis finds that power from new solar plants is now less costly than power from existing coal or gas plants in China and India

Join @davlucmac from @SkafosAI at @EcomWorldConf to see how you can boost #sales using #ai driven interactive guided shopping.

BITCOIN - THE EMPEROR HAS NO CLOTHES

Colonial Pipeline paid hackers on May 8

On May 13, DarkSide told affiliates that its servers and other infrastructure had been seized
https://www.wsj.com/articles/how-the-fbi-got-colonial-pipelines-ransom-money-back-11623403981