The $10 Billion Bet Against Tesla

These days presidential elections have big budgets. The budgets along with unknown money are used to spread all kinds of information, including pervasive amounts of misinformation via social media and illegitimate or barely legitimate news/opinion sources. For example Donald Trump raised $436 million for his campaign. And that was less than Obama in 2008 at an eye watering $778 million.

Now think of an amount 10 times that. That is the amount or liquidity available to Tesla short sellers. This is the dollar amount of TSLA sold short: 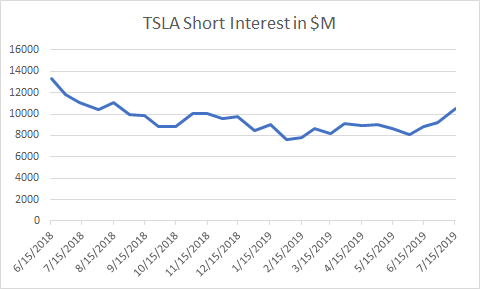 Nasdaq releases short interest numbers twice a month. The trend line points slightly downward. But if you look at this data with the current short interest shares times compared to the share price when the last short interest data was released, you get a better idea how short interest moves in response to the stock price: 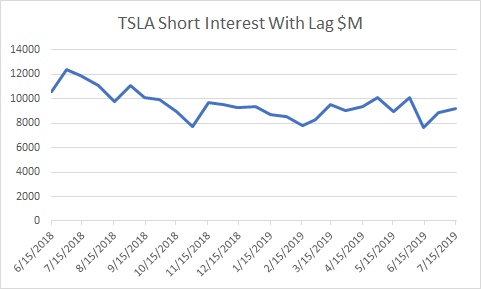 Basically as the stock moves, short interest changes to keep the short interest at roughly a constant $10B. Now think about what kind of influence that kind of money can buy. Even legitimate news sources regurgitate blatant nonsense from troll twitter accounts. The media disinformation campaign against Tesla is probably one of the best run openly secret campaign that I know of. It has become so bad that the only reason there is even an iota of attempted balance in the news is public shaming of reporters on Twitter. Some of them are so shameless that in spite of that public shaming of their lies, continue on with their disinformation. An LA Times reporter named Russ Mitchell went so far as to use a Tesla short seller block list and block thousands of twitter accounts – here is a discussion on Twitter and then feign ignorance. This is a tech reporter who claims that he wasn’t responsible and wasn’t concerned for weeks that his account may have been hacked (which it obviously wasn’t) until others at the paper were informed.

Even generally well informed people keep telling me that I will die using autopilot or my car will catch fire because that’s all they read in the news. Random people have walked up to me in a parking lot and asked me how I managed to get a Model 3 considering the trouble Tesla is having manufacturing them and the long wait list. Both of those are false but that is never reported. On the other hand, media reports of other electric cars, non existent or otherwise are generally positive. There is no coverage of their troubles manufacturing or selling their cars, almost no coverage of delays, fires, recalls or any other mishaps related to those cars.

None of this is surprising considering how far Tesla has come. Once you drive a Tesla no other car compares. I had to rent a car on vacation a few days ago and it felt so backward in time driving another car. Being a gas car was just part of it. The whole driving experience in general, no regen, crap screen, poor UI/UX, junk radio, and cruise control is no autosteer. Tesla has done what no other car company is capable of. Take for example the current state of efficiency of the Tesla competition. Nobody is even close. It is almost as if the traditional car companies have no idea how to make cars.

On top of that Tesla is out to disrupt energy markets with storage. Every storage project is a nail in the coffin of gas peaker plants. The survival and success of Tesla means the death of many old ways. And we know there is a lot of money attached to the survival of the status quo. Here’s to the wild ride of owning Tesla stock!

2 thoughts on “The $10 Billion Bet Against Tesla”