Pandora (P) is in the business of online radio. Twitter (TWTR) is in the business of communication via microblogging. Tesla (TSLA) makes cars. That’s where the dissimilarity ends and the similarity starts. All of them are hot tech stocks (yes I called Tesla a tech stock). None of them are profitable yet (except Tesla on a non-GAAP basis). Tesla went IPO in 2010, Pandora went IPO in 2011 and twitter went ipo a few weeks ago. From 2010 – 2012, all three showed similar revenue growth. All of the estimates for 2013 are based on reports for the first few quarters and estimates for the remaining quarters. For Twitter, I estimated revenues and losses by just doubling the first two quarters. For Pandora I doubled revenues and for losses, I used data from a previous article. For Tesla I used 4/3 * first three quarters. 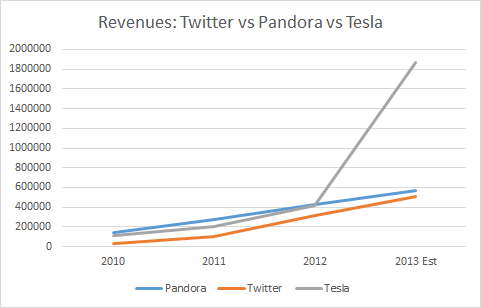 However, as far as losses go the picture is not so similar: 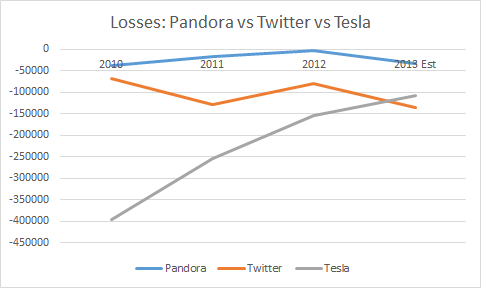 We can already begin to see how Twitter doesn’t particularly paint a good picture. The other two seem to be reducing losses significantly.

From my previous article on Pandora, it is obvious that the path to profitability for Pandora is only becoming smoother in 2013.

2013 for Tesla, was a great year where they finally started delivering cars in volume (on track for 21,500 Model S delivered this year). I have covered Tesla extensively before.

The picture for Twitter is unknown. It has grown revenues significantly in 2013 but profitability seems out of reach. Pandora revenues come from both advertising and subscriptions. Twitter, on the other hand, solely relies on advertising. Also, Pandora advertising is fairly unavoidable – ads are forced listen. Twitter, in comparison, by design is difficult to advertise in, especially on mobile devices where a majority of their customers are. In fact twitter started out by using SMS, where it is inherently difficult to advertise in the limited space.

It is fairly obvious that for companies with sort of comparable revenues and revenue growth, Twitter is wildly overpriced compared to both Pandora and Tesla. If anything, Twitter should be worth much less than the other two.

As of now, Tesla stock is depressed from highs thanks to adisappointing quarterly report, media attention to Tesla cars on fire and an accident at its factory. Pandora is hitting new highs thanks to analyst upgrades. Twitter stock direction is currently flat to slightly down from its IPO but I’m predicting a slow downward movement.

So if you were thinking of adding a hot tech company to your portfolio and were considering Twitter, thanks to the hype – maybe you should consider Pandora or Tesla instead.

What bug is this?