In Part 1, I covered what would happen if 10% of the cars on the road became electric overnight. In Part 2 I look at the the technology used to solve the problem – storage. However, before we get into storage, lets look at some grid basics:

In extremely oversimplified terms, there are two kinds of power plants – base load and peak. The base load power plants are nuclear, coal and certain kinds of gas power plants. The power output of these plants is difficult to adjust quickly so these stay on all the time and produce an amount of power that doesn’t fluctuate much. When power needs go up or down a lot, like during the peak hours, peaker plants come online. Power from peaker plants, which are most commonly gas turbine plants is very expensive and inefficient compared to base load plants. Here is a simple diagram (Source):

As more renewables like solar get added to the grid this gets worse: 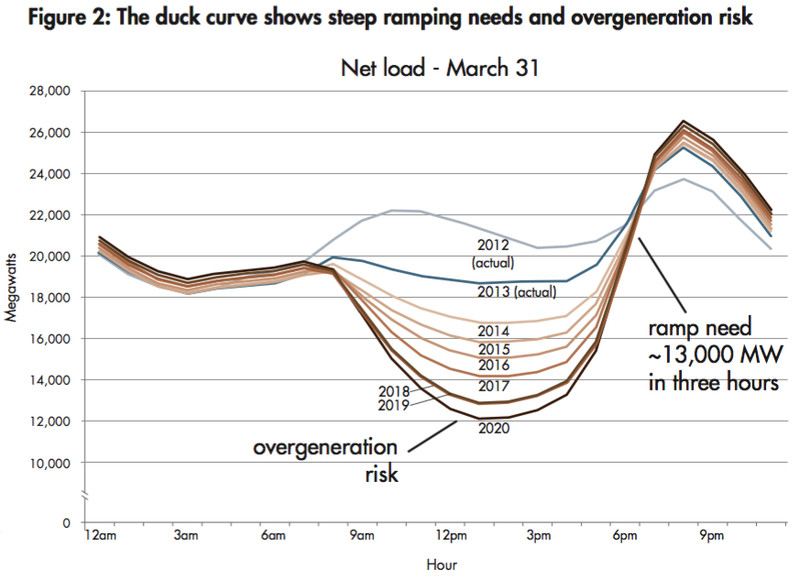 Source: Why the “duck curve” created by solar power is a problem for utilities

The idea behind storage is simple – what if you take all the excess generation during the day, store it and then use it in the evening. Basically flatten the duck curve. The idea for storage is not new. There are many kinds of storage, some are old school like pumped hydro – use excess power to pump water up a hill and then use the water flowing back down to generate power later. What is new in storage is affordable battery based storage. The advantages of battery storage are many, they don’t occupy much space, they respond in seconds, they can be placed anywhere and also have secondary functions like providing grid stability. Here is a Tesla project in Hawaii with solar and batteries:

Source: Tesla launches its Powerpack 2 project in Hawaii, will help Island of Kauai get more out of its solar power

This is utility scale storage. Storage doesn’t need to be utility scale. In fact storage can be deployed anywhere on the grid, including people’s houses. There are several projects around the world where lots of small batteries are deployed in users houses and the utility can control those remotely as a virtual grid during peak times. And the homeowner can use those to supply power during an outage. Here is the story of a Vermont utility deploying a virtual power plant at customer houses. Here is one in Australia.

The Impact of EVs

So where do Electric cars fit in? First electric cars will significantly boost electricity consumption in the near future as more electric cars arrive and as more countries plan on phasing out sales of fossil fuel cars. UK and France plan on a ban by 2040. China is planning to join, possibly by 2030. Now think about this. Current vehicles have a life of 20 years or so. The average age of a car on the road in the US is nearly 12 years. So let’s say that gas cars sales are disallowed in 2040 in many sections of the world. Then at the latest by 2030, fossil fuel car sales should fall dramatically – after all who wants to buy something that will be worthless in no time. Already used car values are falling and depreciation is a huge problem. Imagine the depreciation on a car that will actually be worthless from being unsellable. Almost every car company plans to launch an entire range of electric cars between 2020 and 2025. In 5 years, which is a very short time in car industry years, just one product cycle, consumers will need to consider whether they want to spend on a new gas or electric car.

The second, more important, factor is that every electric car is a battery on wheels. What if when you come home and plug your car in, your car can earn you income (or save on peak power costs) by pumping power into the grid or your house with part of the remaining charge on the battery? And then charge later at night? Auto manufacturers are already planning on this. Nissan made V2G (vehicle to grid) a point in their Leaf 2 announcement. The Tesla Powerwall has 14kWh of storage. But a modern electric car has the ability to store 2 – 7 times that power.

We are in for some exciting times of the total disruption of energy in our lifetimes. Stay tuned or subscribe using the form on the right for more.

Would you hire this guy? #engineering #software #hiring

The F in FSD must be close enough to scare the shit out of someone somewhere to bring out the F in FUD.

Do you want to do this with you E-Commerce recommendations? Reach out to @SkafosAI at hello@skafos.ai

Run your model in shadow mode, make future predictions, and validate them with actual outcomes

CalTech software talk on software that doesn't exist by a guy whose software is perfect as the last president's calls.

Register here for my Caltech Distinguished Alumni Award speech "Software that Never Fails and Can't Be Hacked" on June 7, 2021 at Noon.
https://www.alumni.caltech.edu/events/software-that-never-fails-join-dan-odowd-bs-76-for-a-virtual-event

Footprints on my porch: