A Techie’s Guide To The Future Of Tech Stocks: Apple

As a developer who constantly works with technology, I follow all the happenings in the tech world, especially the mobile world. I also follow the major players’ stocks and I look at them from the perspective of both an advanced user who often needs to support these devices and an investor.

With this series of articles that I will write in combination at this blog and at The Motley Fool (an updated version of this article is here). I’m going to present my opinion on the state of technology at the largest tech companies and the future as I see it. Let me start with Apple (AAPL), the largest player in this market.

I’ve been sorely disappointed by their latest product announcements. Apple has been showing only marginal progress in device specifications and new devices, pig-headedly avoiding standards (e.g. Lightning connector) and iOS is becoming stagnant in comparison to the progress made by Android and features native to other devices such as Windows phones. Also Apple’s legal shenanigans are causing a negative impact on brand image amongst geeks. It is hard to imagine Apple shooting themselves in the foot to spite others but they are doing just that by moving away from Samsung, launching a half baked map solution, low resolution but still very expensive iPad mini. The other thing is Apple artificially restricting the availability of software on older devices like Siri on the iPad2. If the iPad mini has the same guts as the iPad2, what is the problem with getting it on the iPad2?

I have no problems with Apple’s annual launch schedules for devices as long as the devices they launch leapfrog the competition in available features. But their current patterns, initially missing LTE, then missing NFC, missing on the iPad mini screen resolution etc. are not what I would expect from a company with so much cash.

In spite of all this, the correction in the stock was overblown. Looking at the positive, the iPhone is soon to be available on China’s largest carrier and the supply issues will eventually be sorted out. Also Apple has now seemingly no existing product announcement to make in spring thanks to the iPad mini, iPad 4 and iPhone 5 all being recent. This would be an indicator that Apple might possibly announce a brand new product (an actual television) or focus more on their “hobby” – Apple TV. It could also be an indicator that they are moving to shorter product cycle updates.

Apple finally settled with HTC. I am hoping the same happens with the rest of their lawsuits and they finally see the light and get back to making good products. Maybe iOS 7 will have widgets or “live” icons and they will be a “revolutionary” invention and bring iOS into the modern world.

No matter what happens, in the near term I expect Apple to keep growing as they work out supply issues and expand the iPhone to more carriers worldwide. However longer term, the growth machine might slow down unless Apple starts improving their product lineup drastically either by introducing new products or by offering multiple variations of their products like offering top of the line hardware in 3″ and 4″ iPhone and the iPad and iPad mini and not keeping the smaller sized hardware with lesser features.

I attribute at least part of the Apple pullback to growing concern about Apple being able to meet expectations on their devices in the face of stronger and better competition from both device makers like Samsung and Nokia (NOK) and OS makers like Google (GOOG) and Microsoft (MSFT) and Amazon (AMZN).

I am holding onto my Apple stock for a few more years. I might sell small portions if the stock hits 725 in the next 6 months. I think that is quite likely. Let’s look at one rarely used but very useful metric that Apple provides – guidance. Here is a chart of Apple’s guidance vs Reality: 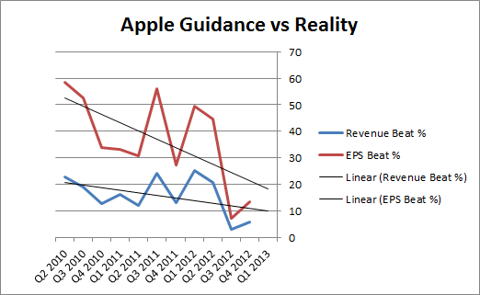 From the trend it looks like Apple is moving towards more realistic guidance. For next quarter, they provided guidance of revenue of “$52 billion and diluted earnings per share of about $11.75“. So if Apple only meets this estimate, that would imply an earnings contraction from last year where EPS for Q1 was 13.9. Even if Apple beats EPS guidance by 20%, that would imply an EPS of $14.1, which is only a 1.4% increase.

There are two scenarios here:

One Apple is understating EPS and the beat will be higher. Considering that they are saying revenues will be 13% higher than last year, EPS should be 13% higher too putting it at $15.70.

The second scenario would be that Apple has a margin contraction. This is entirely possible if the iPhone5 is more difficult to produce than the reports make it out to be and/or the effect of snubbing Samsung is higher than Apple makes it out to be.

A ratio that I like to look at is how much EPS is improving compared to revenue. 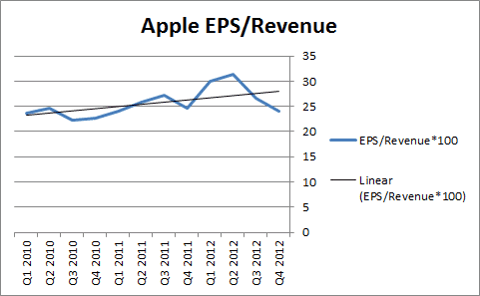 Companies can fake this improvement using share buybacks but Apple is not doing that because their share count has been increasing. Also Apple’s current share buybacks are not expected to reverse this trend only flatten it.

Just a fun statistic a coworker sent me – this year at the University of Virginia there were more Macs (56%) than Windows PCs (44%) amongst moving in undergrad students. So Apple will do fine at least in the short term (next 3 years).

2 thoughts on “A Techie’s Guide To The Future Of Tech Stocks: Apple”

So $TSLA beat all VW owned brands combined in 1H 2021 by a wide margin, but how did VW do vs. their own goals?

You wouldn't know it from the MSM, but VW failed miserably - missing the lower boundary of their CEO set goal by 38%, and upper - by 54%