Tech Titans: Performance Of Google Vs Apple Vs Microsoft

There was a time in 2012 when people were betting on Apple (AAPL) stock to reach $1000 before Google (GOOG). Since then Apple is down from it’s over $700 peak while Google is making new highs over $1000. In the mean while, Microsoft (MSFT) stock is up about 40% in one year while Apple is essentially flat.

So what changed? Which stock looks the best going forward? These are the questions I hope to answer with this article by looking at revenue and earnings growth for all three.

5 year TTM Revenue change charts for Google show that in the last five years, Apple has handily beat both Google and Microsoft. But from the chart, it looks like Apple’s growth has flattened, while it hasn’t for the other two. 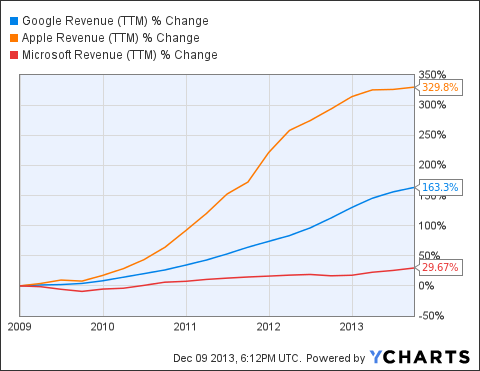 Looking at the last one year, it seems both Google and Microsoft have Apple beat for revenue growth. 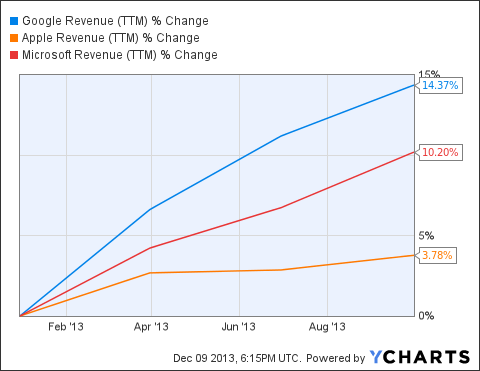 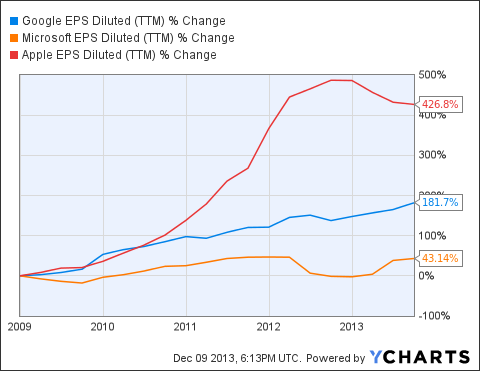 However, the last one year has been even worse for Apple earnings than it was for their revenues while Microsoft and Google have shown much better progress. Especially Microsoft. 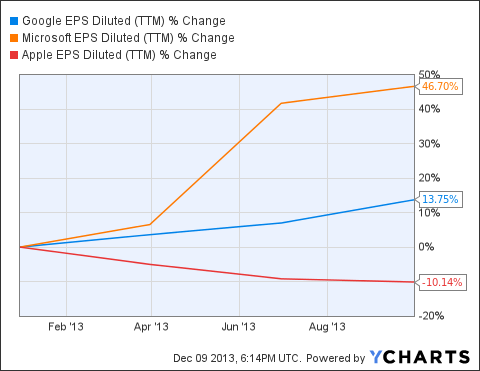 So what happened at Apple? Well the answer to that is simple. Apple’s growth was tied mainly to the demand for iPhones and then iPads. In the last few years, Apple’s improvements to the iPhone have been incremental from the user perspective, especially considering the dramatic improvement in Android phones. The iPad also now has significant competition from other tablets.

The iPhone was introduced in 2007, the iPad in 2010. In theory, to keep up that spectacular growth that Apple has been enjoying, it would have made sense to launch a new line of products – an Apple television set or a significantly redone and completely re-imagined “magical” Apple TV box. Or something else.

Alternatively, Apple could have stepped up the competition by introducing a larger variety of phones, tablets and computers in different sizes. With it’s vast resources and ungodly amount of money Apple could have executed its product strategy better.

Apple is trying to improve margins by selling a premium priced, yet not made from the usual premium materials, iPhone 5c. It also marks a departure from their usual tactic of just making the previous generation the cheaper model. My personal opinion is that if they had kept the old iPhone 5 alongside the new iPhone 5s, nobody would have paid extra for the iPhone 5s. After all as far as the user goes, the only meaningful difference is the fingerprint sensor. I can’t imagine anyone paying $100 for that.

For the next iteration of iPhones, what I would like Apple to do, is have two product lines: the normal line and the “c” line and give the user screen size choices in both lines like this:
Normal Line: iPhone 6-4, iPhone 6-5 with the only difference being the screen size, the rest of the internals being the same
“c” Line: Similarly iPhone 6c-4, iPhone 6c-5 and if they really want to keep their low end phone as a 6c-3.

The iPhone just looks dated compared to the new 1080p screen 5″ phones from the competition. Similarly with the iPad. Keep the specifications of the 10″ and the mini the same except for screen size.

Short term, Apple will probably get a significant boost from it’s deal with China Mobile and the launch of the new iPads and iPhones in this quarter and I expect the negative EPS growth trend to slow down, if not reverse.

As evidenced from the charts above, Google’s revenue and EPS have continued to grow steadily for the last five years and unlike Apple, there has been no perceptible slowdown in growth. Google is the undisputed leader in web search, online advertising and mobile advertising. Google also is the most innovative company on the planet, period. Also, Google brings in 10% of total worldwide advertising dollars. That includes all forms of advertising, not just internet based. Google is the undisputed leader of web adertising and also owns half of mobile ad revenue.

Unlike Apple, which focuses on a few products and services, Google goes in all directions at once, sees what sticks, and then develops on that. This makes Google a very agile company to meet customer needs. What makes Google unique is their acceptance of out of the box ideas, even in non-core areas such as self driving cars, being an ISP, generating green power etc.

Also finally, the fruits of their Motorola acquisition can be seen with the new Moto X and Moto G phones.

Going forward, I expect the same level of growth from Google as they take more global advertising dollars, launch more products and services and take market share from other online services like Facebook and enterprise products from Microsoft.

For someone who follows the media, the charts for Microsoft would be surprising. All we hear is that nobody wants a Windows Phone, Office products are being replaced by the cloud, mobile devices are eating Windows market share. But in spite of all this, Microsoft has surprisingly manage to grow both revenues and profits!

Microsoft also followed Google’s footsteps in acquiring a phone company, Nokia (NOK) and I think that is a great step forward for Microsoft as it attempts to compete with Apple and Google. I have covered Microsoft before and presented the view that Microsoft is the one company that competes with almost every tech company in some way and with the Nokia addition they just added to that list.

Even though the changed in Windows 8 were very unwelcome, I think Microsoft’s new unified strategy is a big step forward with one “Modern” interface across all product lines. I’d say it was the opposite of too little too late – too much too early.

Looking forward, with growing Windows Phone market share, growingenterprise product market share, succes of the XBox One and growingBing market share – at the expense of Yahoo (YHOO), a growing cloud presence, fantastic new convertible Ultrabooks running Windows Microsoft seems to be turning around and their stock performance from this year might continue.

It looks like Apple and Microsoft are currently similarly valued by earnings and Google is valued over twice as much. We can see that Google’s growth is steadier and higher than the others (with the exception of TTM EPS growth by Microsoft). This just about justifies the P/E premium that Google commands. Amongst Apple and Microsoft, the numbers logically make Microsoft seem the better bet for now. However, the impact of Apple’s new products remains to be seen.

Longer term, Apple needs a new line of products or significantly more diversification in their existing product lines. Just financial engineering as suggested by Carl Icahn is a mere distraction. Apple needs to get back to growing earnings and revenue.

Disclosure: Long AAPL, GOOG. May open a position in MSFT

1 thought on “Tech Titans: Performance Of Google Vs Apple Vs Microsoft”

3 days into the new administration. What were they doing for the last whole year?

Several people wanted a list of energy transition-related SPACs this morning so I put together a quick working doc. I'm sure I've missed some and this is still a WIP, but hopefully it's helpful. If I missed something let me know!

I made a website where you can put bernie in places using google maps street view. Enjoy!