1. Chinese Website – Tesla opened a Chinese website where they are taking $40,000 deposits for the Model S. This is equivalent to the Signature deposits so it is possible that the Model S Signature is coming to China.

3. Jan 2015 Unveiling of the Model E – This surprising news now puts a clearer timeline to the Model E, potentially putting a launch date of the car at end of 2016 to 2017 based on the Model X timeline.

My personal opinion is that the last item is what caused the stock to move. I have been covering Tesla, here at Seeking Alpha, for a while now. Every article I write about Tesla brings out at least one thread of comments, that other auto manufacturers will catch up before Tesla’s Gen III launches with a viable (long range) and affordable electric car. The other common thread in many Tesla related articles attempts to cast doubt on the greenness of electric vehicles, which I discussed here.

I have touched on GM’s (GM) Cadillac ELR before and with this article I hope to compare future and current electrics and how automakers lack of focus is preventing this from happening.

For someone who wishes to use an electric car as their only vehicle, the only current viable option is a Tesla. My wife and me use her Nissan (NSANY) Leaf as our primary vehicle but we still need a gas car for weekend trips or when we need the cargo room of an SUV. The Leaf is a very economical car to lease, especially after fuel savings.

When we leased the Leaf, there were only three available electric car options –

When it comes time to replace the Leaf, we will have one additional option, the BMW i3. It is possible that the Honda (HMC) Fit EV, GM Chevy Spark EV, Mercedes B Class Electric, Toyota (TM) Scion EV also make it nationwide by then. However, all these vehicles have the same problem as the Leaf – range limited to only in-city, daily commute kind of driving.

When it is time to replace that next car, I’m now even more hopeful that the Tesla Gen III will be an option. What this will offer us is a 200 mile range. Maybe more, if we decide to spring for a bigger battery. At this point our second car would be relegated to either one or two annual trips or trips where we need the cargo room of an SUV – I’m assuming here that the Model E will have a lot more cargo room than the Leaf, considering that the Model S has more cargo room than many compact SUVs like the Audi Q5. Alternatively, if the Tesla Gen III SUV is imminent, we could go completely Electric with a Leaf and a Tesla SUV, hopefully with solar panels.

All this while, not a single automaker has announced or even talked of plans of a long range electric bigger than a very compact car. The only rumors are those of a BMW i5 – possibly a stretched out BMW i3. So the range will still be inferior to the Gen III and it is very doubtful that BMW can bring this car to the market in time to compete with the Gen III.

Instead of focusing on bringing a better electric car, manufacturers are giving us cars which are limited to a few states and designed for regulation compliance. At the same time, they are planning on launching Fuel Cell cars, which are no more than a joke. There is no infrastructure to support fuel cells. These cars will also be limited to small markets and extremely expensive compared to electrics.

Nissan has announced one potentially promising electric car – the Infiniti LE – but that has been indefinitely delayed and no details about range were ever made public. So even Nissan, the automaker with the largest electric focus is far behind Tesla in providing a viable electric car. 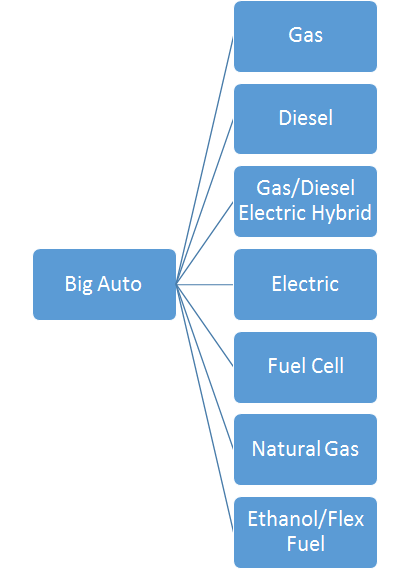 Almost all big auto makers are working on too many things simultaneously and so far have been unable to provide any really exciting viable green car. If manufacturers really want us to believe in fuel cell cars, they need to start investing in fuel cell infrastructure first. Just like Tesla is investing in Superchargers.

It is this lack of focus that is providing and will continue to provide Tesla room to grow unabated. This is not even considering other things that a Tesla brings to the table like Wifi updates. We just got our first recall for the Leaf – a software update for which we need to go to the dealer. And this doesn’t even take into consideration that it is not just Electrics that Tesla competes with. The Gen III will compete with every other luxury car.

Even amongst super-cars the major names like Ferrari, Lamborghini, Porsche, McLaren etc. are completely avoiding electrics while embracing hybrids. This will make room for small auto makers and new comers to spring up. That is how Tesla started with it’s Roadster. Now we haveDetroit Electric and the latest announcement from Saleen Automotive (SLNN) that they plan to make a new electric car.

Comparing Tesla Valuation With Other Automakers

A recent Seeking Alpha article discussed how overvalued Tesla is compared to other manufacturers by looking at their P/S ratio. 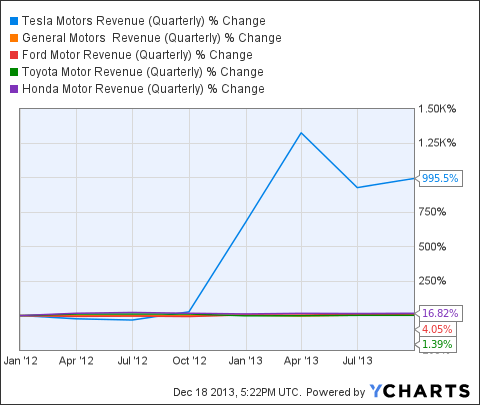 However, what the author fails to take into account is the growth expected from Tesla. Revenues are expected to double in 2014. This would justify the premium that Tesla trades at.

The author states that “The idea that TSLA deserves to trade at a premium multiple of 20+ fold in Price/Sales and Price/Book is ridiculous.” However, Tesla is also expected to grow revenue at 20+ fold compared to the other automakers.

There is no viable upcoming electric competition for Tesla and there is unlikely to be in the time-frame of the Gen III launch. This will give Tesla a huge first mover advantage.

My new profile photo drawn by my 12 year old

$TSLA @Tesla energy revenue (green) vs regulatory credits (blue). Reg credits is a faster-growing business with 100% margins. With expected continued growth at least for 5 years, maybe 10 as the world gets more serious about climate change.

This while he craps on crypto. Technological shift in energy and transportation will provide opportunities to millennials

Munger Says Millennials Will Have "A Hell Of A Time Getting Rich Compared To Our Generation" $BRK.A $BRK.B https://talkmarkets.com/content/stocks--equities/munger-says-millennials-will-have-a-hell-of-a-time-getting-rich-compared-to-our-generation?post=310140

April Update for my son and my 100 books in 2021 (8 books a month challenge). Join us in the challenge and get yourself and your #kids #reading