Many of my articles on Tesla (TSLA) on Seeking Alpha have some commenters that fall into one of these camps:

It surprises many when presented with the fact that America is the top oil producer in the world in 2013. Here is available data for 2013 from the EIA in Thousand Barrels/day. 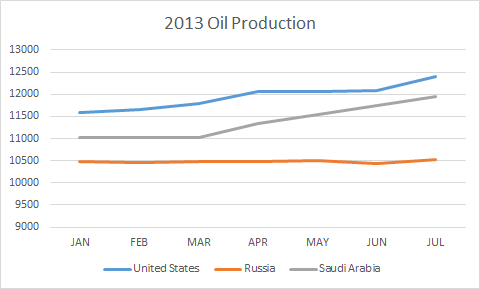 The US has also been growing its production steadily. 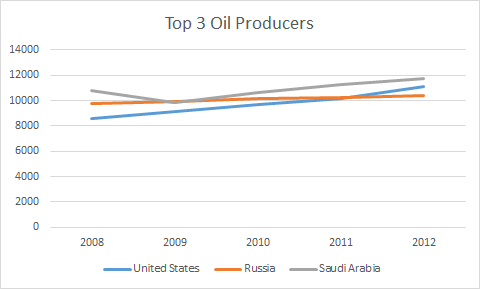 At the same time imports are falling (graph is in thousand barrels). 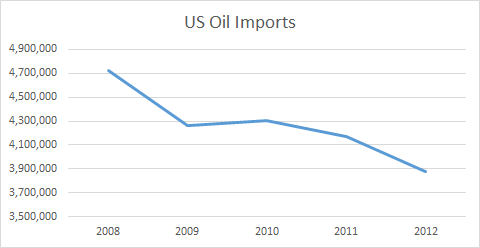 America also leads the world in natural gas production. This is where things get interesting for investors. There is an American Oil and Natural Gas boom and there is ample opportunity for great dividends because a lot of the oil and gas production and transport companies are structured as Master Limited Partnerships – MLPs.

Currently many upstream (and to a smaller extent, pipeline) MLPs are trading at below normal values thanks to attacks by an analyst firm called HedgeEye on several large MLPs such as Linn Energy (LINE) and Kinder Morgan (KMP).

Thanks to the ongoing negativity, both those form my two favorite picks. If you are not a fan of K1s at tax time both the companies have alternative options: Kinder Morgan Management (KMR) and Linn Co. (LNCO).

I won’t go into much more detail here because both Linn and Kinder Morgan are heavily covered stocks. But I’ll say this much that in spite of the bad environment, Linn has managed two major acquisitions and a dividend increase is imminent. This has driven the stock back up into the 30’s but there is still room to grow. I believe that any dividend increase will push the stock back up to levels before the Hedgeeye attacks.

Here are the top 5 upstream MLPs in size and their dividends. Linn Energy is almost as big as the rest of them combined so before you invest, note that most of these are small companies.

From the list it is easy to see that spectacular dividends are not hard to find from American Oil. Here are the total returns for them in the last 5 years. 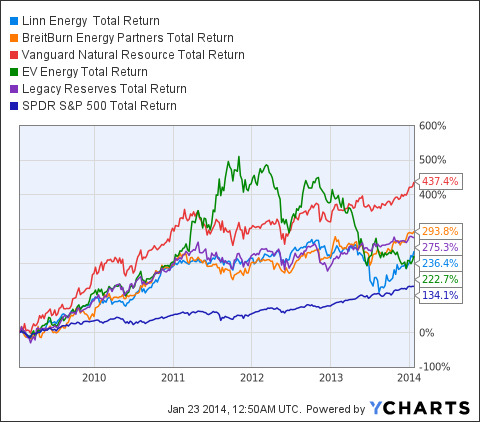 Every single one of them outperformed the S&P 500, which had total return 134% measured using SPY (SPY) over the last 5 years.

While my wife and me do a majority of our driving in an EV, are planning on getting solar panels and also invest in green energy companies, I treat our oil and gas investments – great dividends from the American oil and gas boom – as our hedge to green energy.

Wow, hats off to these parents:

Former NRA President duped by Parkland parents into giving fake graduation speech to empty chairs. He thought this was the rehearsal, but a simple Google search would have told him the high school doesn’t even exist.

One of those crossover points we will look back on: @BloombergNEF analysis finds that power from new solar plants is now less costly than power from existing coal or gas plants in China and India

Join @davlucmac from @SkafosAI at @EcomWorldConf to see how you can boost #sales using #ai driven interactive guided shopping.

BITCOIN - THE EMPEROR HAS NO CLOTHES

Colonial Pipeline paid hackers on May 8

On May 13, DarkSide told affiliates that its servers and other infrastructure had been seized
https://www.wsj.com/articles/how-the-fbi-got-colonial-pipelines-ransom-money-back-11623403981