Getting Solar Panels in Charlottesville

As I write this, our 6.9kW Solar Panel system is almost ready to go, pending Dominion installing a new meter. I’ve written before about the economics of solar power and how they make financial sense even in a state like Virginia with no incentives. I’ll talk about the power production from the panels a little later. First, I’ll go about the shopping process. All prices below are before federal rebate.

To start with I emailed or called almost every solar installer I could find that worked in Charlottesville – Altenergy, Sigora Solar, Genesis Home and Energy, Solar Connexion, Baker Renewable Energy, Entero Energy and some more that I can’t recall.

I got initial quotes from everyone and they ranged from ballpark estimates of $3.50/W – $5/W installed for a 5kW system. Eventually, after some negotiation and attempting to maximize the system in our budget, I got prices ranging from $2.50/W – $3.10/W from my top three choices based on the responses I received.

The first was Solar Connexion, based out of Blacksburg. Their quote was the highest of the three but they have been in business the longest and offered the longest workmanship warranty on their work. They offered me a choice of various panels from LG Monocrystalline Panels to Chinese Polycrystalline panels. However, they did not do micro-inverters. For slightly over our 3$/W approximate budget, they could give us 20x260W LG Mono panels or 22x240W Trina panels. They wouldn’t do >300W panels because they didn’t want to deal with the larger physical size.

The second was Sigora Solar. They exclusively offered SolarWorld Mono Panels and offered the second longest workmanship warranty. They initially offered 220W Panels and if those suit your need, I’m sure they can get you a fantastic deal on those. But after some negotiation and research, they offered me some very nice 270W Mono panels for a very good price, slightly under the price/W that Solar Connexion offered. They also do not do micro-inverters.

However, we finally ended up going with Genesis Home and Energy because Randy from Genesis was flexible with designing a system in any way we wanted. He offered us the widest possible choice of panels to use with either string or micro-inverters and gave us pricing for both options with various different panels. He was willing to use any top-tier manufacturer panel that was currently available on sale. He managed to find us a great deal on 315W JA Solar panels and came in significantly under the price of the other two. In fact, our price with micro-inverters would have been comparable per Watt with the other two. But thanks to the great deal on the panels, we decided against micro-inverters, instead going for more wattage. Randy also used a PowerOne dual MPPT inverter, instead of a Sunnyboy, which seems to be the most popular choice, because it treats the panels like two independent strings. Even with the SolarWorld 270W mono panels, which friends of ours are also getting from Genesis, their price was well under the other two.

Now that the shopping is done, on to power production from the panels. On average we use about 1200kWh/month (taken from the last one year of data, this is higher than usual thanks to the current insane winter – one year monthly average before this winter was 1030kWh). According to PVWatts, the system will generate about 725kWh/month or 60% – 70 % of our energy usage.

Since we are in the Dominion Solar Purchase Program, our payoff for the panels (using price after Federal rebate) is about 10 years. The chart below assumes that the Solar Purchase program will no longer exist after five years. It assumes 0.7% annual panel output degradation and 3% increase in the price of electricity every year. 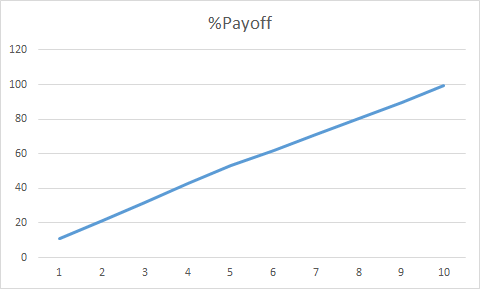 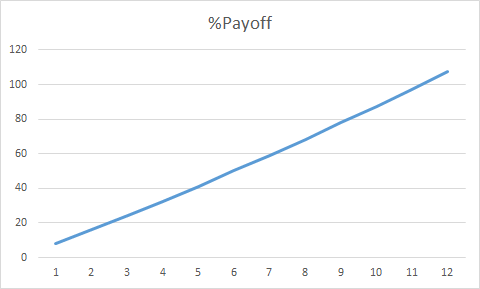 5 thoughts on “Getting Solar Panels in Charlottesville”