I’ve done previous EV and Plugin Market share analysis on Seeking Alpha but now will continue that here on my blog instead. My goal is to update quarterly. All numbers are US only and all data is from InsideEVs unless specified otherwise. The last time I updated was in October and since then it seems like there has been a lot of Electric and Plugin news. Total plugin vehicle sales crossed 200,000 in the last 12 months and had the highest ever market share in a trailing 12 month period. Q1 Plugin sales rose 31.6% as compared to Q1 last year.

The number of available plugins also continued to grow. However, big auto just kept introducing more plugin hybrids. Not too many additions to available electric vehicles: 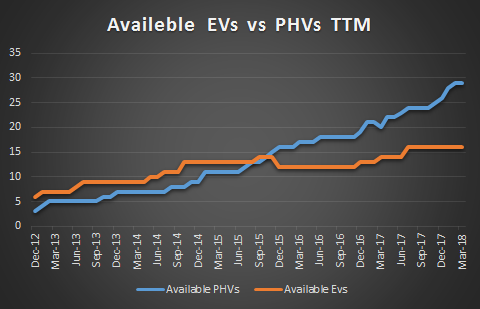 In spite of this, as far as the EV vs Plugin Hybrid share of the plugin market is concerned, things are just more of the same: 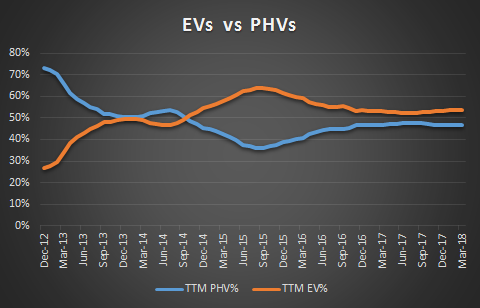 Electric vehicle sales crossed plugin hybrid sales in October 2014 and have never looked back since. Basically big auto doesn’t care what you or I want or what the data says. They want to convince us to buy their hybrids instead of electric vehicles and that has not been working.

Here is how the market share of the top plugin (EV and PHEV combined) vehicle manufacturers has changed over the years: 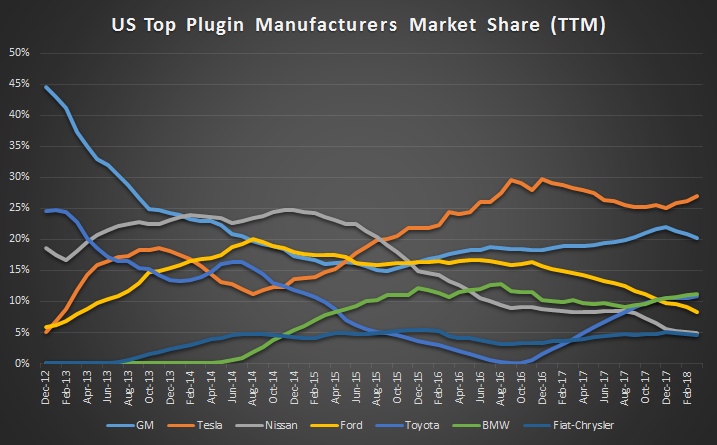 Plugin manufacturers not shown on the chart have a market share of 3% or less. Out of all the choice in plugin hybrids, it looks like Toyota’s Prius Prime and GM’s Volt are keeping the hybrids chugging along.

Here is what it looks like for just EVs: 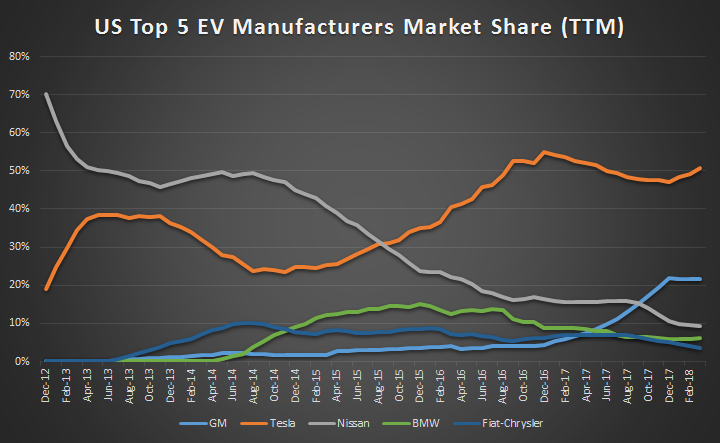 The EV manufacturers not shown on the chart have a market share of 3% or less.

The biggest loser here is Nissan. Their improvements to the Leaf were too slow and too late. It let GM overtake them with the Bolt. We can already see the Model 3 ramp related uptick for Tesla in the last couple of months and as Tesla ramps production higher it will be difficult for other manufacturers to catch up.

Here is an interesting look at the ramps of the Chevy Bolt and the Model 3: 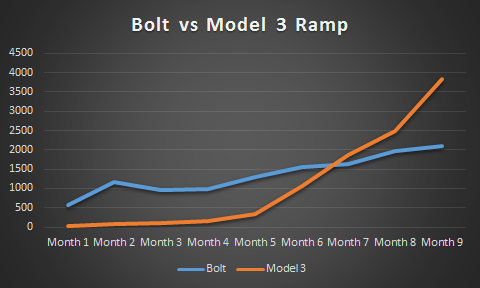 Plugin and Electric vehicle market share among all vehicles (all vehicle data from Bureau of Economic Analysis) is also growing fast: 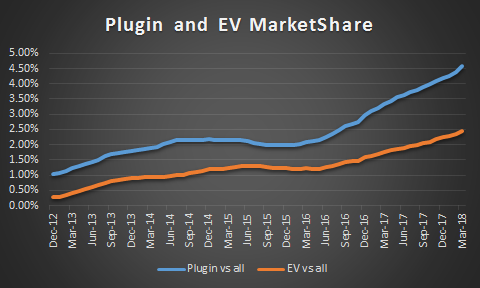 So all in all, the last few years have been great for Plugins and Electric cars but could have been a lot better if big auto had its act together and introduced better electric cars faster.

A message for DC Tesla owners:

@JayinShanghai @elonmusk @Tesla Can we do this in front of the White House?

Wow. @potus is being so lax on climate change, the courts had to step in to force him to consider climate. Maybe the administration’s love of GM and anti-Tesla stance has more to do with maintaining the oil industry’s status quo than anyone realizes. https://twitter.com/LyndseyLayton/status/1486874437769211914

BREAKING: It was the biggest offshore lease sale in U.S. history. But a federal judge just cancelled it, saying the Biden administration must first consider the climate impacts before selling drilling rights in the Gulf. @LFFriedman has the news: https://www.nytimes.com/2022/01/27/climate/federal-court-drilling-gulf.html?smid=tw-share

Rahm is dead. His whole research team has been murdered. Their tech is stolen. By his girlfriend. He simply wants revenge. But stumbles into a conspiracy that runs deep. Is it too much for one #engineer #ghost?
👨‍💻 👻

Rahm Shah's invention is stolen and he and his team are murdered. All he wants is revenge. But he stumbles into a far-reaching global #conspiracy. Too much for one #engineer #ghost to handle.