Tesla US Sales Likely to Exceed Audi in August, BMW and Mercedes Soon

In my last post I talked about Model 3 crossing all other comparable sedans and all other electric vehicles combined. Here is a look at Tesla US unit sales compared to the German luxury brands: 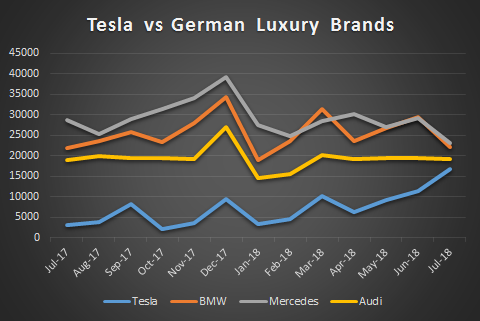 I expect Tesla to cross Audi sales next month. It should exceed BMW and Mercedes over the next few months. Considering that Tesla only sells 3 models, this looks like the end of German luxury dominance in the US for the foreseeable future. Here is what the Model 3 looks like compared to the cars in it’s segment individually: 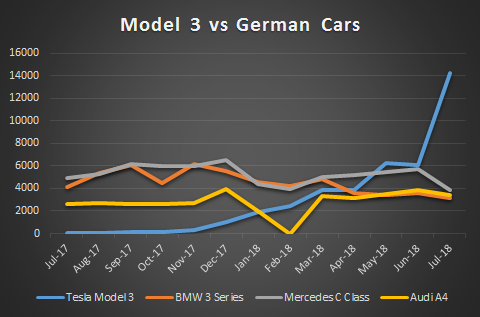 Thanks to the gigantic backlog (Tesla had nearly a billion dollars in customer deposits), this dominance is likely to continue. Also considering the cars that people turned in for highly optioned Model 3s, it is possible that this is permanent as the Model 3 opens up a new market. While I did not turn in anything to get my Model 3, I would never have considered any of the luxury competition.

Here are the brands that the Model 3 outsells. The entire brand, not just specific models:

Why isn’t Tesla valued like all other car companies?

1 thought on “Tesla US Sales Likely to Exceed Audi in August, BMW and Mercedes Soon”

Ford has created a fragrance designed to smell like gasoline https://trib.al/HeHgE7p