Since my last EV market share update for July, things have changed a lot. I heard rumors that the competition will kill Tesla, nobody would possibly want to buy a Tesla when much better cars like the iPace and the eTron and EQC are coming. Instead we got this: 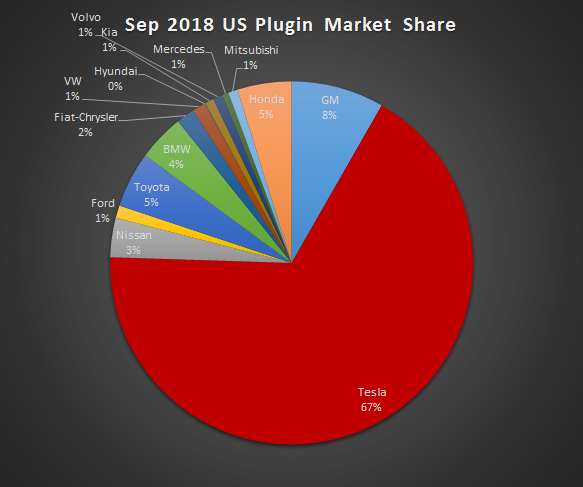 Tesla market share went up from 57% to 67%. Here is what the monthly progression of Tesla’s march to domination has looked like: 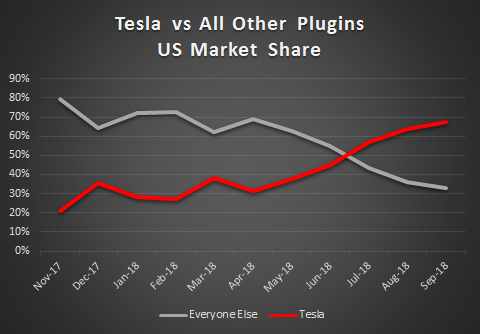 I’m not sure it even makes sense for me to keep track of this anymore until we have more entrants in the market to challenge Tesla. No other company is interested in making and selling a compelling plugin in volume.

On the luxury market front, here is what Tesla looks like compared to the German luxury brands – Audi, Mercedes and BMW: 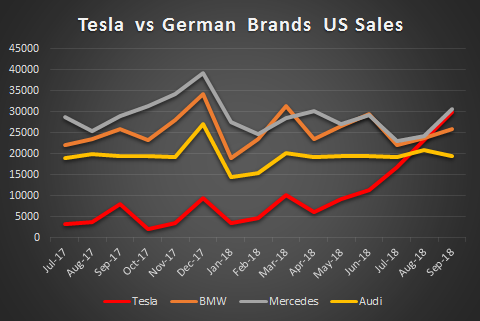 A majority of Tesla’s market share can be attributed to the Model 3, whose sales absolutely crushed everything else. This is in spite of the fact that the short range 35,000$ Model 3 has not even started delivery. So Tesla is crushing the market with higher end Model 3s. Some of this can be attributed to pent up demand from early reservations but as more people get to see and drive the car, the more the sales will increase. Here is what the Model 3 looks like compared to its gas peers: 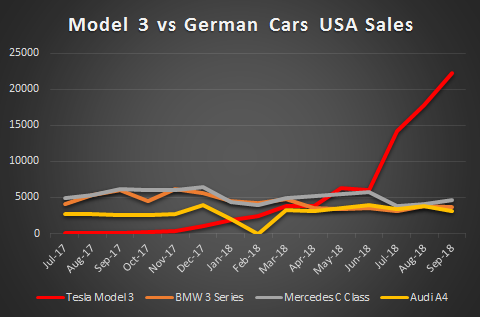 I’m wondering if it is worthwhile keeping this data updated too. The Model 3 is competing with mass market cars in volume and is likely to do so for the foreseeable future. It entered the top 5 passenger cars sold in the USA in September.

And in spite of all this Tesla stock is near 52 week lows because of a stupid tweet. Generally this data gets hidden in the noise in the media. The Model 3 is the safest car the NHTSA has ever tested and Teslas are selling like hot cakes. The company is close to profitability and I’m taking the opportunity to increase my Tesla stock position. The tax credit for buying a Tesla is ending soon. This is likely to cause an end of year rush to buy Teslas. Avoid that and get yours now and get 100$ of supercharging credit on any Tesla.

All data is from InsideEVs and GoodCarBadCar.