Here is a recent tweet from Nikola Motor Company: 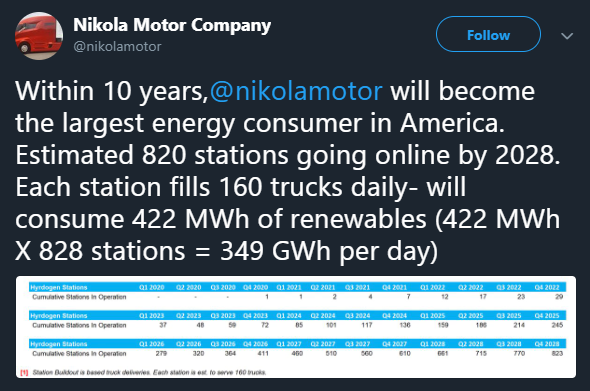 Analyzing this tweet for just a minute with a little mental math made me realize just how bad fuel cells are. A Tesla Electric Semi is expected to have at most a 1MWh battery for a range over 500 miles. Assuming Nikola trucks are refueling about 500 miles worth of Hydrogen each time on average, Fuel Cell trucks consume 2.6 times the power of electric trucks. Every 500 miles, each fuel cell truck wastes 1.6MWh of energy. The ~131,000 trucks that Nikola says will fill up at their stations will waste a total of 217GWh every day if fuel cell trucks are used instead of electric trucks. Basically for the same amount of energy we could operate ~350,000 electric trucks!!

Just how much energy is 217GWh? Every day an average household in the US uses 35kWh. So 217GWh would power 6.2 million households!! In other words, if we just used electric trucks instead of 130,000 fuel cell trucks, we could power all the households in Virginia, Mayland and DC combined and still have some left over! This is how bad fuel cells are.

.@nikolamotor wants to be the biggest waster of power in 10 years. 160 trucks would use 160MWh of power at the most per charge if they were electric. #foolcells. 217GWh/day of wastage. Enough to power 17,000 homes for a year. https://t.co/ldCviFq3Fy

The response I got was this instead of them refuting my calculations. So my assumptions must be in the ballpark:

The unbiased answer is that H2 can be made over 24 hours while electric can’t. More energy than that is wasted in grid issues to support battery only and massive demand charging. Hydrogen compared to electric grid can be more efficient when entire supply chain is compared.

This is a surprising response because batteries are exactly what is needed to reduce wastage in the grid! We all already know that from Tesla battery in Australia that not only can batteries store excess power, they can make renewables dispatchable and provide grid stability. So what is the perfect solution to the massive demand charges? Extra batteries that can also be used for a swap making filling as fast an convenient as fuel cells.

My tweet got more responses than I expected from all kinds of Hydrogen supporters who think that fuel cells are the future. But after the calculations from a big fuel cell proponent, we now have definitive evidence that compared to electric transportation, fuel cells are expensive, wasteful and overall a bad idea. Some people think Electric cars are a stop gap to fuel cells. What they don’t understand is that once you have an electric car that you charge at home and have a full tank every morning for pennies, there is no way you are going somewhere to pay through the nose to fuel an inefficient car. Compare the 66mpge Toyota Mirai to the 126mpge Tesla Model 3.

Some hydrogen supporter arguments related to long range driving. But none of them could provide me any data on how far truckers drive, what percent of truckers would need ranges more than 500 miles. On average, class 8 trucks only travel about 190 miles in a day. Most arguments revolved around my ignorance or bias, reminiscent of the days I used to write on Seeking Alpha.

The hydrogen industry can barely deploy enough filling stations for a handful of cars in a handful of locations. There is literally zero hope that they can deploy hydrogen nationwide for trucks. Also most hydrogen for fuel cells is currently made from fossil fuels. More electricity is likely made from renewables than hydrogen. Filling trucks with hydrogen? That is just a pipe dream.

Ford has created a fragrance designed to smell like gasoline https://trib.al/HeHgE7p