Failure at Tesla, Success Everywhere Else

When you think of a successful alternative fuel (hybrid, electric, fuel cell or whatever) vehicle, the first thing that comes to mind is probably a Prius. Tesla comes next because their cars are successful but unlike other companies, they seem to have major trouble ramping their vehicle production up. At least that is the impression one would get from the news. Tesla is so bad at producing vehicles that sometime “soon”, established auto companies will eat their lunch. So to prove that theory, I have gone back in time and taken a look at all the successful ramps to put this hypothesis to the test. 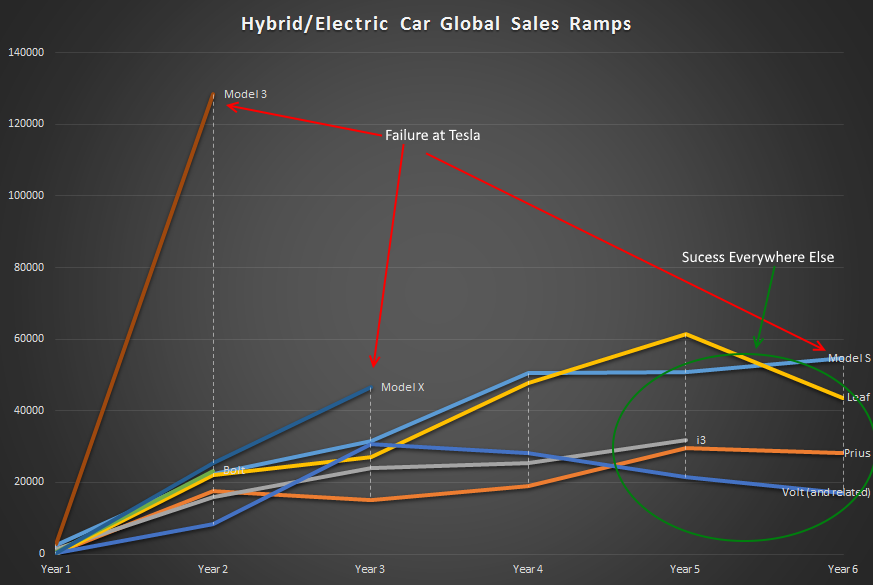 The Model 3 sales estimate assumes that Tesla sells 20,000/month going forward until the end of the year so is likely on the low end. Now if you consider the size of the battery in a Tesla vs the other cars, all other cars would be insignificant on the chart compared to the Model 3. The Model S would look like the Model 3 in comparison measured in battery production.

The next thing I’ve read and heard often is that when these global powerhouses enter the market, they will make a car better than a Tesla at a better price, right? Well, let’s look and see what we have in store in the next few years:

Basically the established manufacturers, global juggernauts, want you to pay 72-82% premiums on electric cars compared to their own equivalent gas cars. Also with much lower efficiency than the much larger Model X. So much for manufacturing superiority. Also if history is any guide, their ramps will be no better than the past ramps from big auto. And these are the cars that are likely to be produced. The last decade is littered with concepts and press releases about cars that were never made and never will be made.

With that being said, I’m pretty sure they will the cars above will have successful ramps. Mainly because their aspirations are very low, nobody wants to make over 6 figures of any model. Also, nobody hangs out at their factories giving you minute by minute details on how many cars are being made. Nobody is reporting trash catching fires at other factories or on the dead BMW factory employee. There will be no social media astroturfing, negative press or anything if these ramps face trouble or the cars fail to sell. Nobody keeps track of the goals of these other companies. Every announcement is a Tesla killer. Every failure to produce and sell is ignored.

Tesla aims high and doesn’t reach and has a CEO with celebrity status, which just means more scrutiny. I don’t even know who the CEOs of these other companies are. All I know is that the ex-Audi CEO is sitting in jail for emissions fraud. None of these cars or companies even aim high in technology. Launching an SUV many years after the Model X and S with such low efficiencies and such high prices is definitive proof of either incompetence or unwillingness to damage the gas car business or both.

My most visited tweet was one comparing the NHTSA ratings of the Model 3 vs the competition. Here is a table with the Model 3 and cars in the segment from other premium brands:

This is why I’m invested in Tesla and drive a Model 3. I would never pay the premium to drive any other “premium” brand. Click this if you still think Audi and Mercedes EV’s have a shot at displacing Tesla even after looking at all this data. The only way they can be successful is if they displace their own gas counterparts. And while the notoriously negative Tesla news coverage continues, I can keep accumulating Tesla shares.

1 thought on “Failure at Tesla, Success Everywhere Else”